Mint’s second show is a composition in three parts. It is about going your own way morally, as an artist and as a human being. Where is the integrity in our thoughts and actions? This is what the works ask and answer, by examples of small engagements: in spheres, rolling globes and gathering circles. 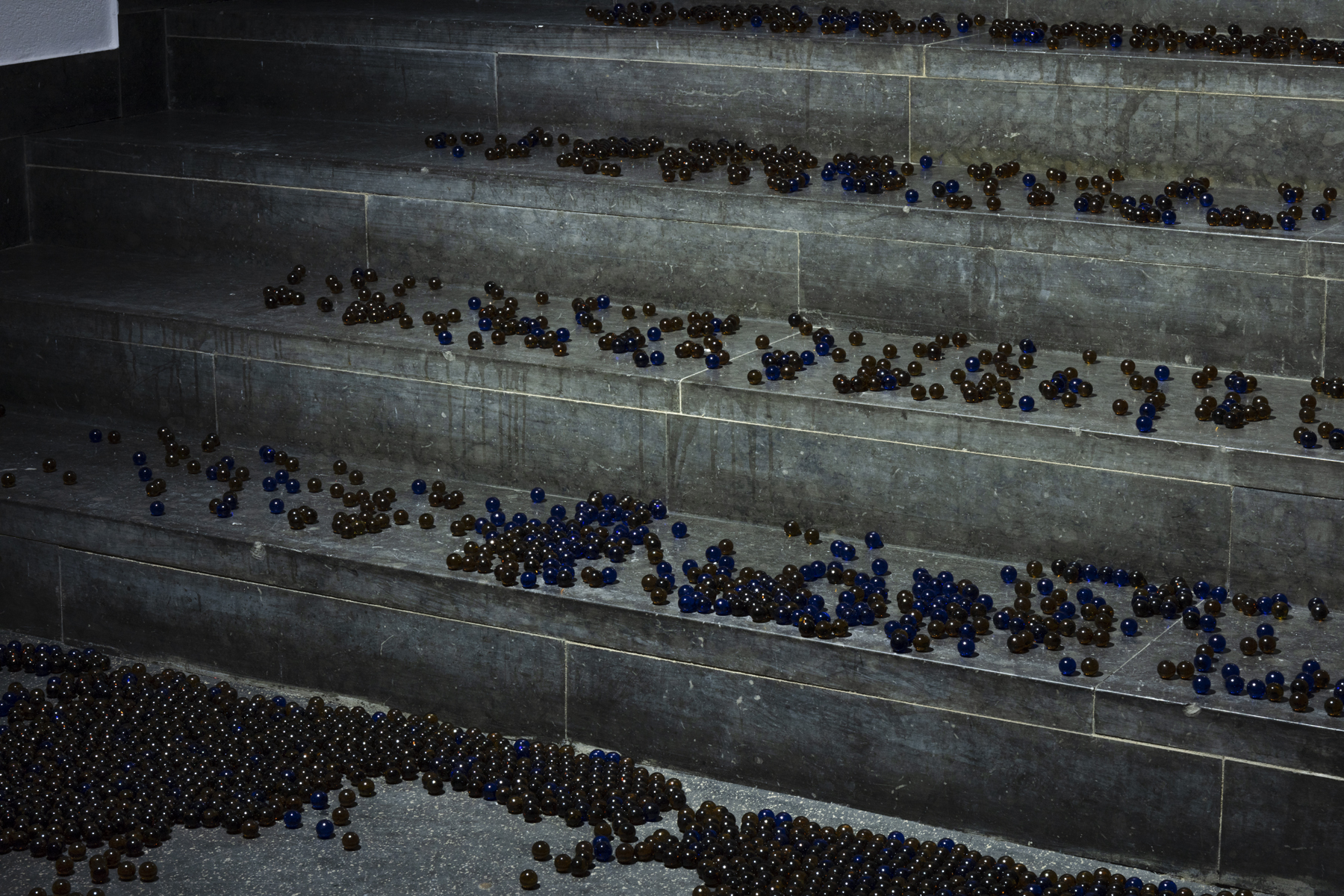 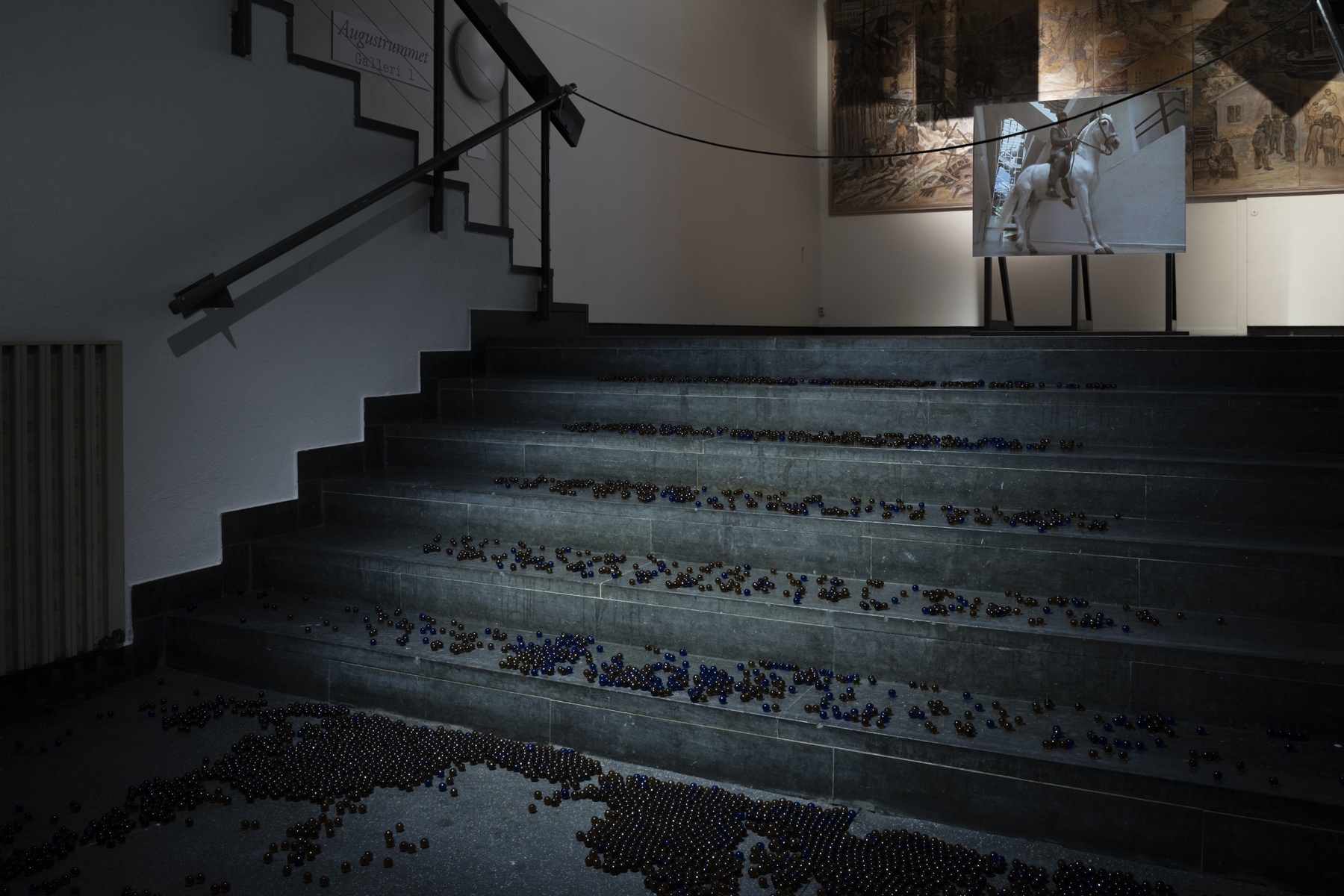 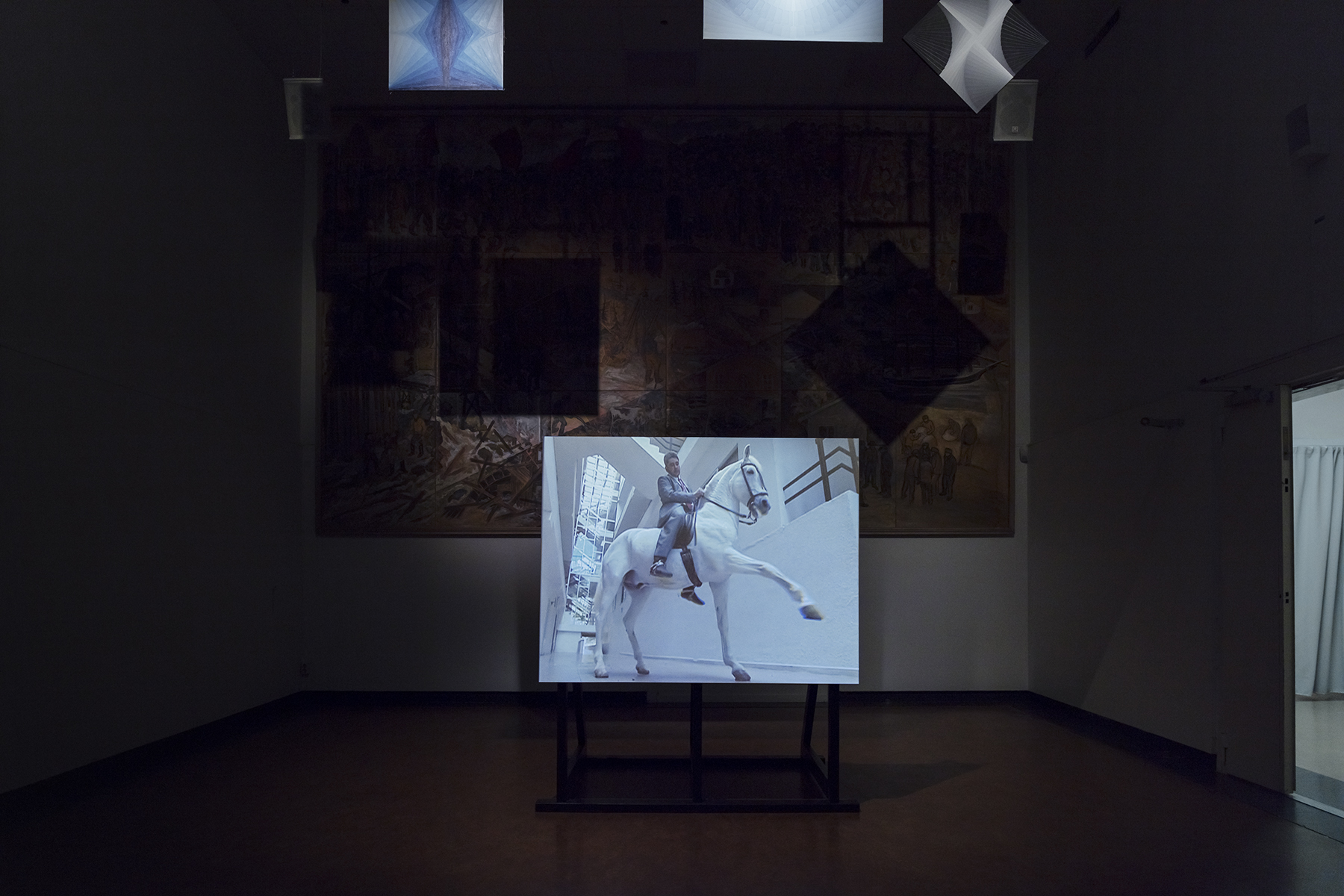 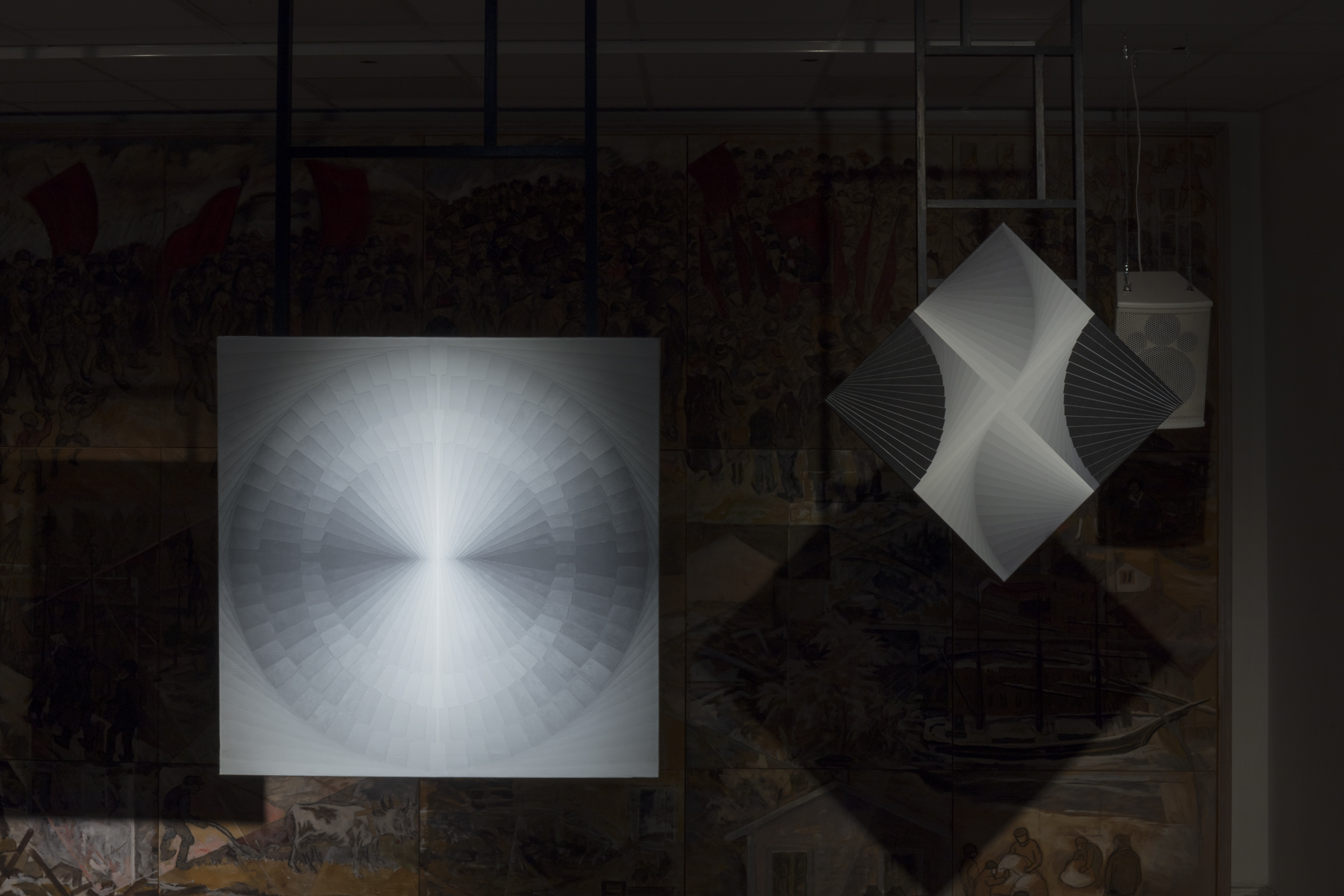 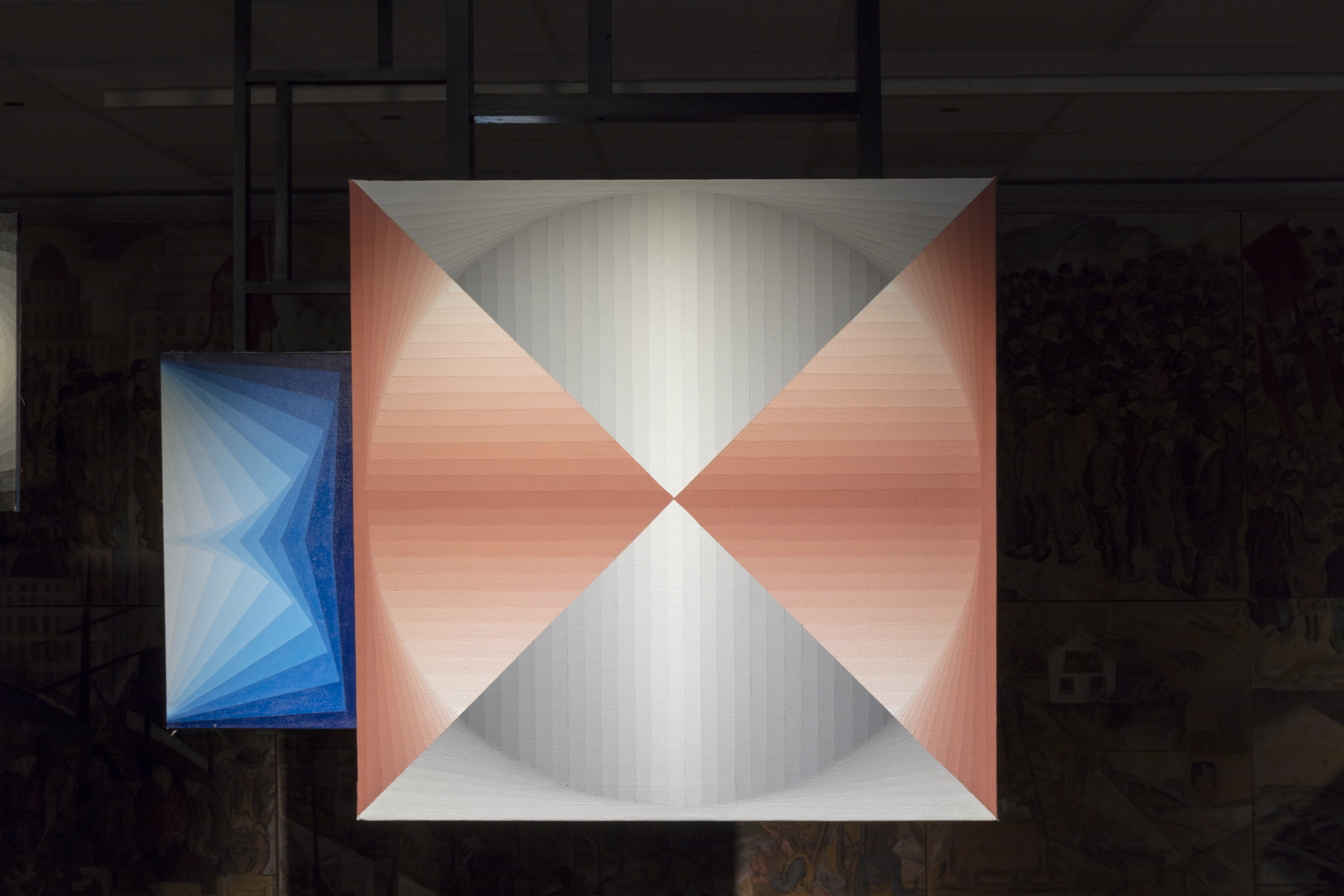 Inger Ekdahl is one of the pioneers of Swedish modernism. In 1963 she was part of Sveagalleriets exhibition ’11 Swedish Artists’. The show was curated by art critic Eugen Wretholm who wanted to highlight ”the bold outsiders” in the Swedish art-scene. The eleven participants, among them Oskar Reutersvärd, Lizzie Olsson and Folke Treudsson, were described as a diverse group of practitioners who had chosen to deviate from the staked out paths of commercial success. In the curatorial statement at the time Ekdahl is described as “a meditative spontaneist”, framing her methodical duality of controlled composition and spontaneous elements which became the hallmark of her practice. After the World War II, Ekdal moved to Paris where she got in contact with Jean Arp (1886-1966), Victor Vasarely (1906-97) and representatives from the art collective De Stiljl, among others. These connections became formative for her artistic development and she remained plugged into the international modernist art-scene throughout her life. In Ekdahls works from the 60s she often used a modified vacuum cleaner which she used to blow paint on the canvases, resulting in multilayered paintings in muffled tones. At Mint, paintings from the 1970s and 1980s are shown. Here, the expressionism of the 1960s has made way for a period of strict geometrical experiments with light, Ekdahl referred to these paintings as systematical compositions. The depictions of fan-like patterns and circles are unique, which create optical illusions and resemble glowing points in motion.

Following Ekdahls passing in 2014 her artistic estate was donated to Ystad konstmuseum.

Thanks to Ystad konstmuseum and Galerie Nordenhake.

A man mounted on a white Iberian horse trots (or dances) through the corridors of Universidad Autonoma in Madrid. The architecture of the school has a special history. The new university is strategically located on the outskirts of Madrid, which made it easy to isolate, and also close to the headquarters of the army. The school’s construction began shortly after the student uprising of 1968, during which students and unionized workers protested against the fascist regime of Franco. The university was inaugurated by Franco himself. The building was created in a grid, and was planned to contain no venues for social interactions, with easy access for police interventions by horse. At later uprisings horses rode through these halls and corridors, and were trained to be to be able to sprint stairs. In the 2002 video Arquitectura para el caballo Fernando Sánchez Castillo takes an interest in the relation between the building and the body of the animal. Its an easy demonstration of the architecture of power. In the installation Canicas (2002) thousands of glass beads are presented. This is also part of the history of the building, during the 1970s the students spread marbles through the corridors of the faculties, thus temporarily preventing police from riding in on their horses.

In the Moa-gallery at Mint there is a listening station with new commissioned poetry by David Väyrynen. Med andra ord [In other words], Ni är guld värd [You are worth your weight in gold] revolves around the example of the good deed, but also around the frustration that can arise as fewer and fewer people engage in nonprofit organisations. The first poem consists of an enumeration of thank yous, big and small, conveyed in the seemingly banal form of submissions to the “Praise of the Day”- a section of a newspaper, where life in all its fragility can be presented. The other puts forward a polemic, stressing the importance and unbearable vulnerability of Sweden’s associations and study circles. Konferenstal [Conference speech] is performed during the opening of the exhibition. David Väyrynen (b. 1983) comes from Hakkas in Gällivare and is a laborer, local politician and poet. In 2017 he published the noted poetry collection Marken, which through prose, songs, sermons and lists, depicts the region of Malmfälten, and two major popular movements fundamentally influencing its culture and mentality: the in-church Laestadian revival and the Socialist Workers Movement.