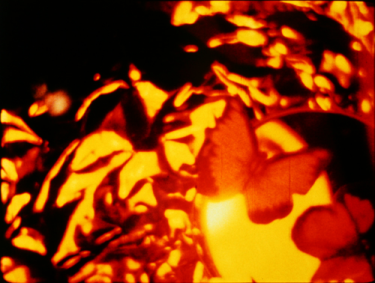 The group exhibition Third Eye Butterfly is inspired by the work of the American filmmaker Storm de Hirsch (1912-2000), considered one of the key figures of the New York avant-garde scene of the 1960s. Like many experimental filmmakers of the time, de Hirsch began her artistic career not as a filmmaker but as a poet. Her work is strongly influenced by an interest in mysticism and occult practices, which are reflected in her exploration of analog effects, Also characteristic of her work is the rhythmic interplay of image and sound, suggesting the impression of a synesthetic interplay of all elements. Third Eye Butterfly takes up the idea of a synaesthetic experience by inviting young, international artists who in their work deal with language, film, music as well as different modalities of perception and reality.

Cathrin Mayer is currently the associate curator at HALLE FÜR KUNST Steiermark (Graz, AT), where she curates exhibitions and performances among others with artists such as Kevin Jerome Everson, Colin Self and Yalda Afsah. Until 2020, she was curator at KW Institute for Contemporary Art in Berlin, where she was responsible for exhibitions and performances. She has curated exhibitions by Anna Daučíková, Kris Lemsalu, and Evelyn Taocheng Wang, among others. She also worked as an assistant curator for exhibitions by Beatriz González, Lynn Hershman Leeson, David Wojnarowicz, and others. Previously, she worked for the 9th Berlin Biennial, hosted by the New York-based collective Dis. Most recently, she curated a major solo exhibition of Estonian artist Flo Kasearu at Tallinn Arthall and the first solo exhibition of Kosovar artist Dardan Zhegrova at FRAGILE (Berlin). In addition to her curatorial work, she teaches regularly and is holding a guest professorship for curatorial studies at The University of Art and Design Linz (AT) for the academic year 2022/23.