The exhibition Third Eye Butterfly brings together an extraordinary range of artistic voices working at the intersection of language, music and film including Nat Marcus, Luzie Meyer, Sofia Restorp and P Staff, to expand on the work of American filmmaker Storm de Hirsch (1912–2000), who is considered one of the key figures of the 1960s New York avant-garde scene. De Hirsch, who’s artistic contribution remains largely overlooked within an institutional context, began her artistic career as a poet, and developed her film based practice through her understanding of language. Her work is strongly influenced by an interest in mysticism and occult practices, which is reflected in her exploration of analogue effects. Distinctive to her work is also the rhythmic interplay between image and sound.

The film Third Eye Butterfly (1968) which lends the exhibition its title, is a result of multiple visual experiments inspired by the diverse range of colorful and abstract butterfly wing patterns. Kaleidoscopic shots and superimpositions come and go in the image, in tune with the soundtrack’s repetitive scheme, it appears as an attempt to translate the multi-color effect of butterfly wings into an expanded film experience. Intended to be projected on a double screen using two synchronized projectors, the film creates the illusion of seeing two butterfly wings animated by the flicker of the projected images. An eye, “the great Eye,” appears several times in the center of an endless spiral framed by the words “Third Eye Butterfly.” On this matter, the American theorist Casey Chanress explains that “the 70mm like effect of Third Eye Butterfly encourages the mind to work as a third eye by fusing the two side-by-side screens into a third meaning, just as Eisenstein caused the meaning of two juxtaposed shots to result in a third implied meaning.”

The idea of being transported into other states of reality emphasized by the pieces present in the show continues in the design of the conventional exhibition space of Mint and is characterized by the work of lighting designer Ines Bartl. Together with the curator, she came up with a concept for the corridors and places of transition for the light situations inspired by the color spectrum from Third Eye Butterfly.

In the exhibition, not only light is used to mark the places of transition, but also the medium of language emerges through various works to describe transformative processes: the audio work Period Piece (2021) by Luzie Meyer for example playfully explores the manifold meaning of the word period that is used to describe how bodies, language and time are regulated. Similar to Meyer’s work, Nat Marcus who produced two new fabric pieces The Velvet Sound (I) and The Velvet Sound (II) (2022) which on their surface are layering graphics, paint and text as well as P. Staff’s poems displayed on hologram fans, engage the idea of multiple, fluid meanings of words to talk about bodies that encounter themselves in transitory states. Sofia Restorp’s newly created drawings, on the other hand, return to a purely visual world, but are thoroughly poetic due to the ambiguous surrealistic interiors that are depicted. Rather than dwelling on the surface her pieces can be characterized by the idea of a reflective looking inward.

Third Eye Butterfly can be seen as an attempt to reflect on Storm de Hirsch’s psychedelic view of the world and how surpassing common notions of what reality is, is more relevant than ever to artists working in the here and now.

Cathrin Mayer (b. 1988 Vienna) is currently the associate curator at HALLE FÜR KUNST Steiermark (Graz, AT). Until 2020, she was curator at KW Institute for Contemporary Art in Berlin. In addition to her curatorial work, she teaches regularly and is holding a guest professorship for curatorial studies at The University of Art and Design Linz (AT).

In the room, two eggs are resting in a nest. In the same place, a drama unfolds. It is told through a dreamlike montage with a poodle, a beauty queen and two sisters who are not sisters in the roles. Here in this place, which is the exhibition, experiences and things are duplicated. Pregnant events without redemption. Anything could happen here. There is both anticipation and anxiety in the air. 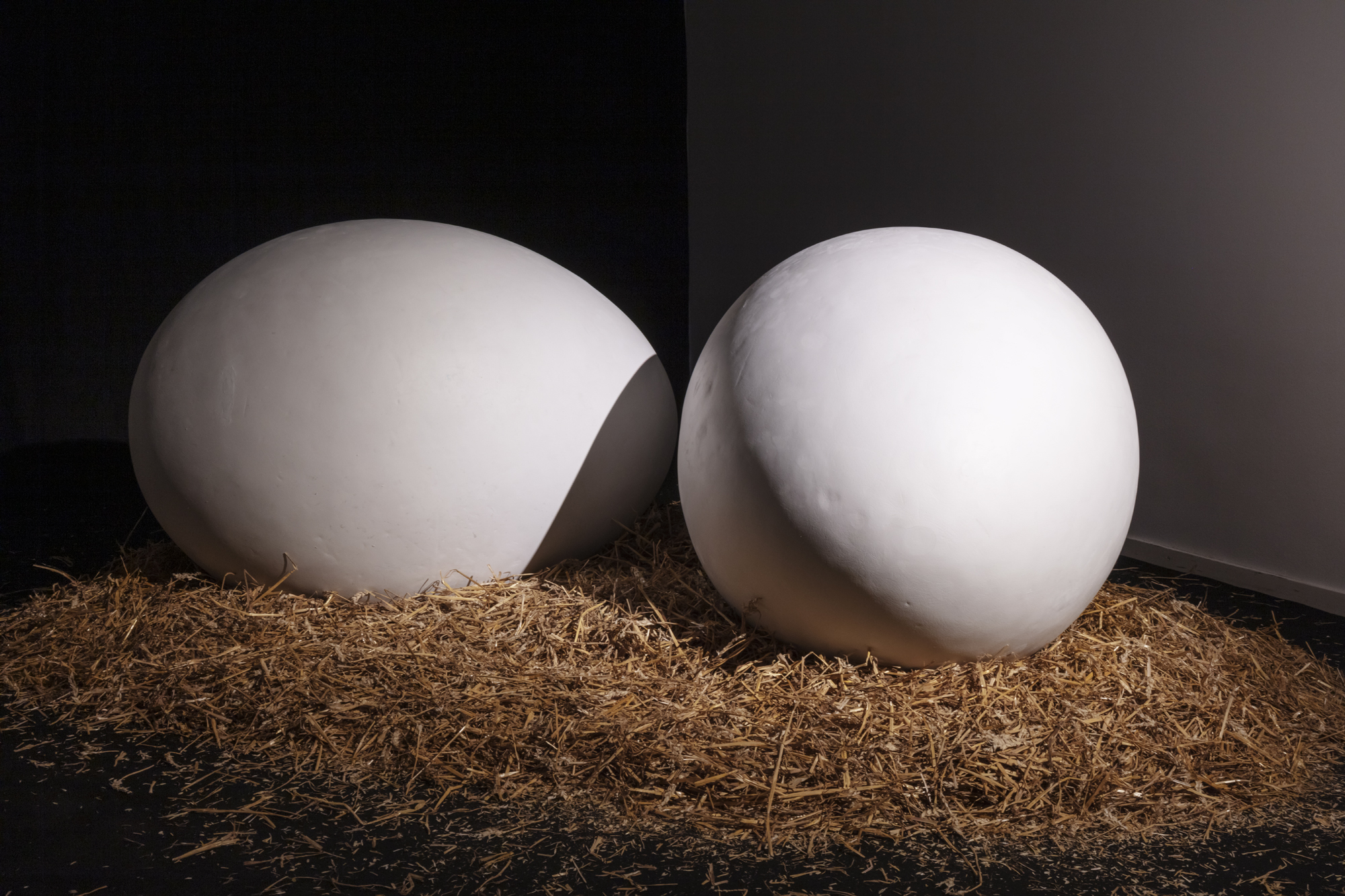 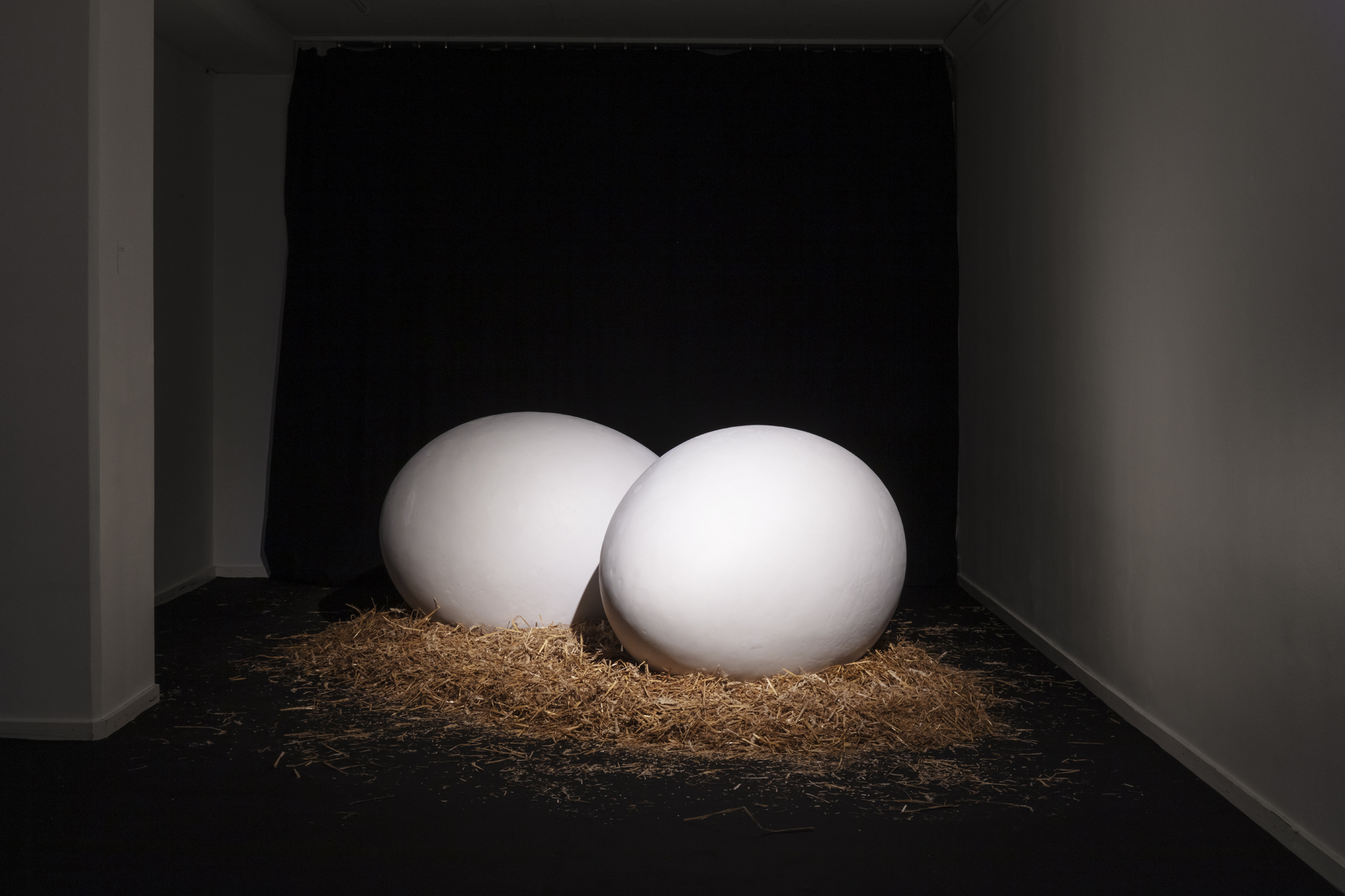 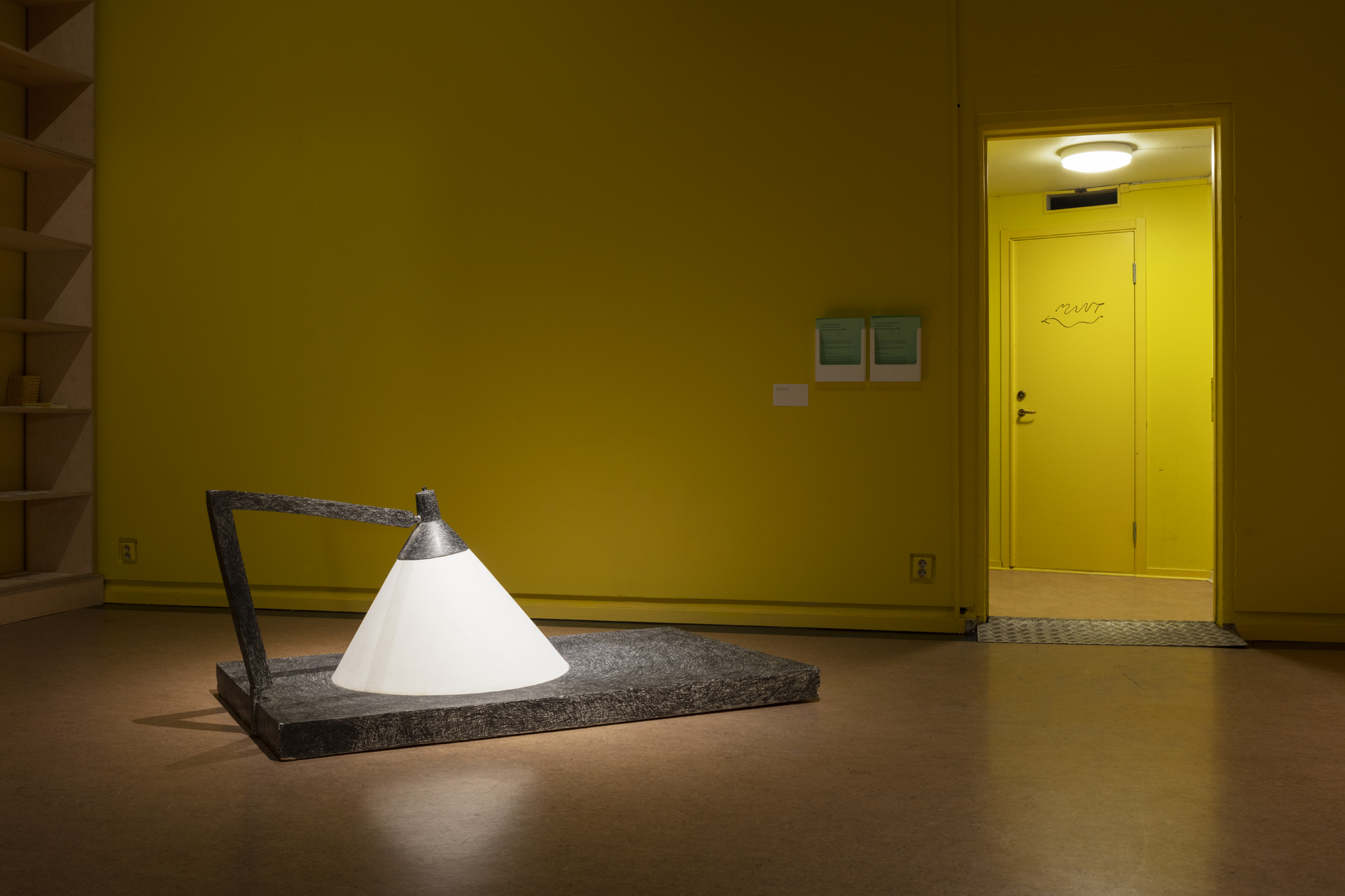 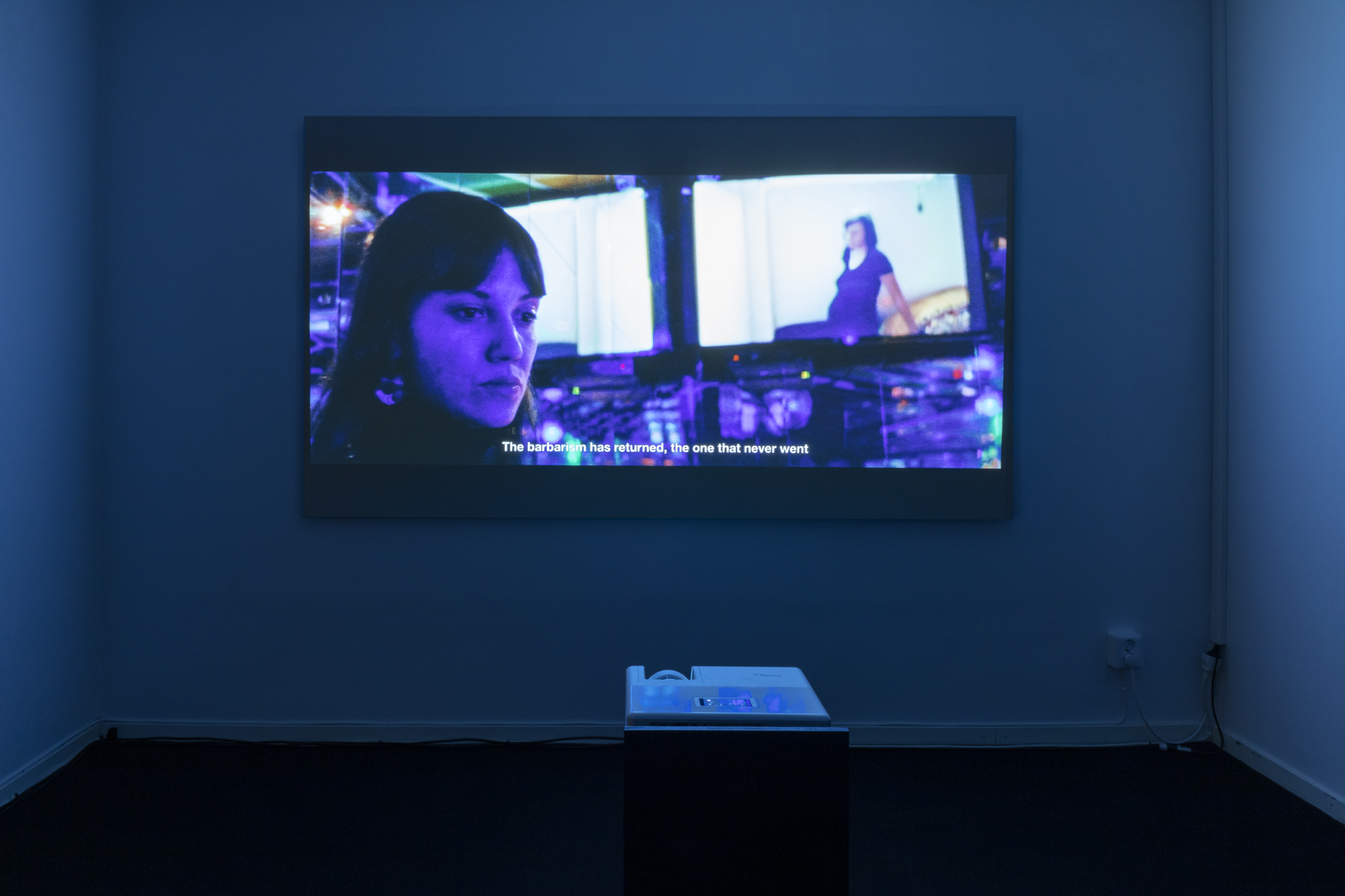 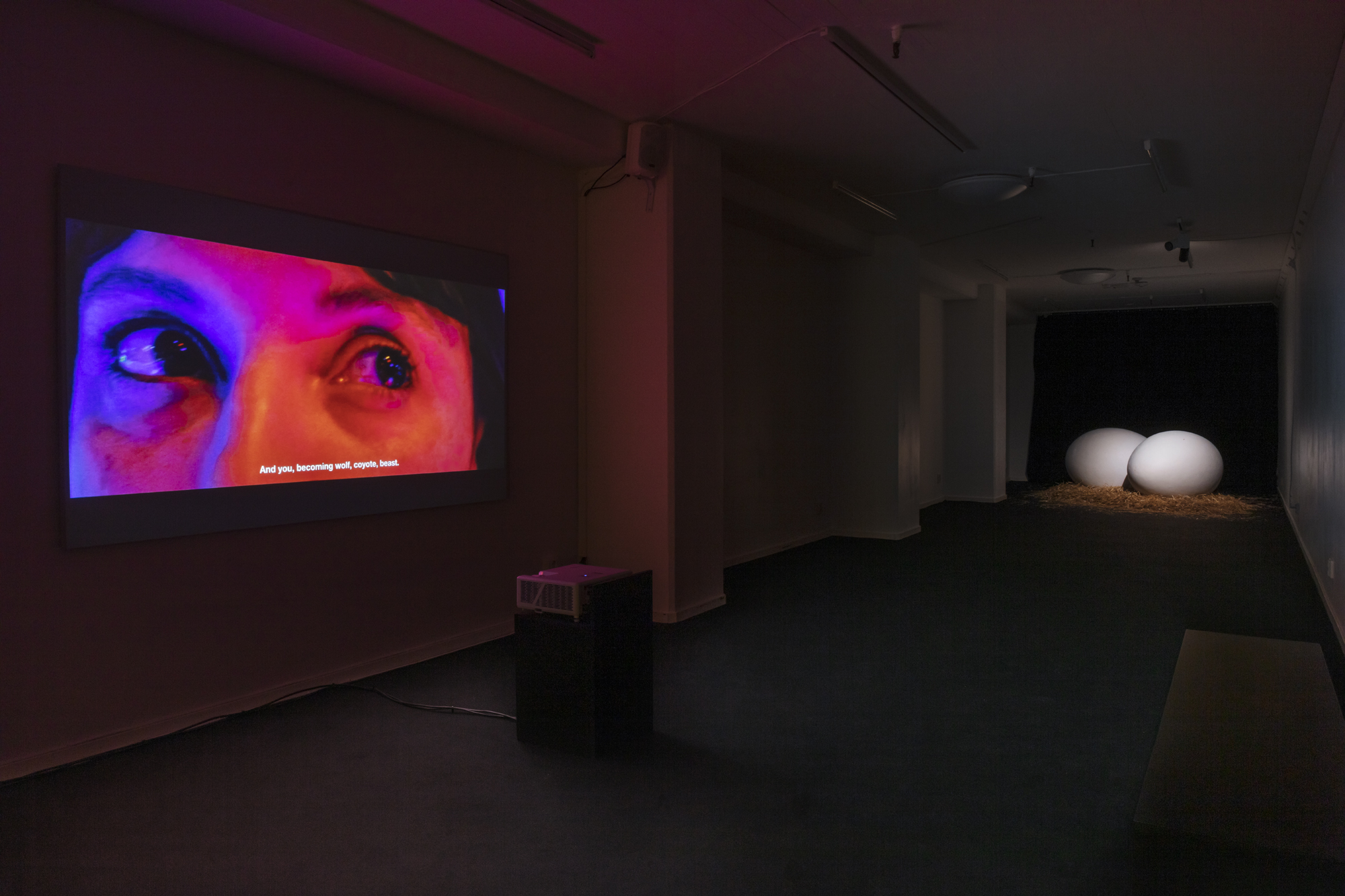 The exhibition Movement Patterns explores the meeting between the body and the monument, the fragile and the eternal, movement and stillness, history and memory.

Movement patterns can be something deeply personal, unique to each person. They can be seen from a distance – human activity as dots on a satellite image from above. They can be discerned throughout history – how the pendulum swings back and forth. They are found in materials – through sedimentation processes, marble can tell us what has slowly been created over time. 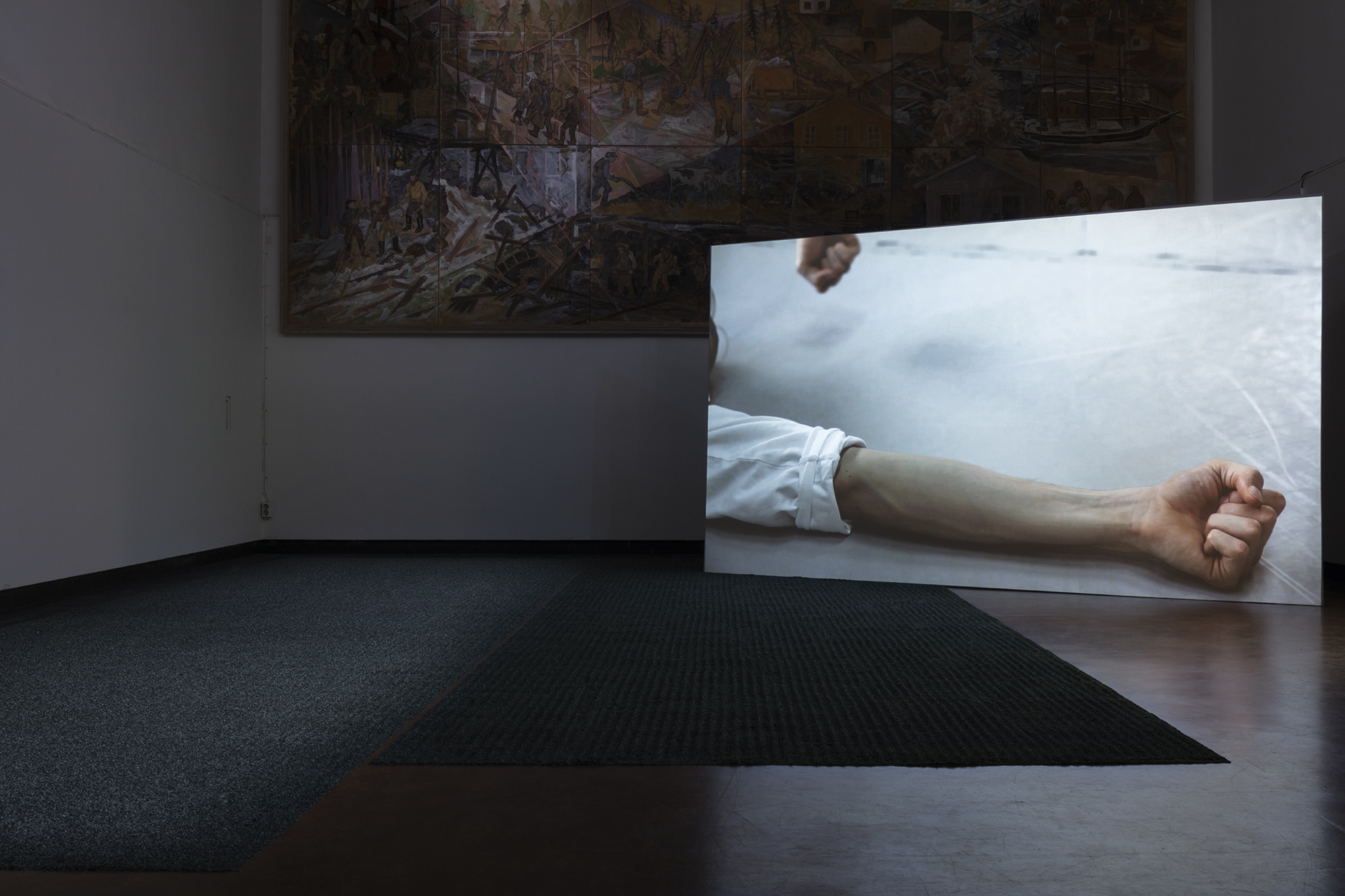 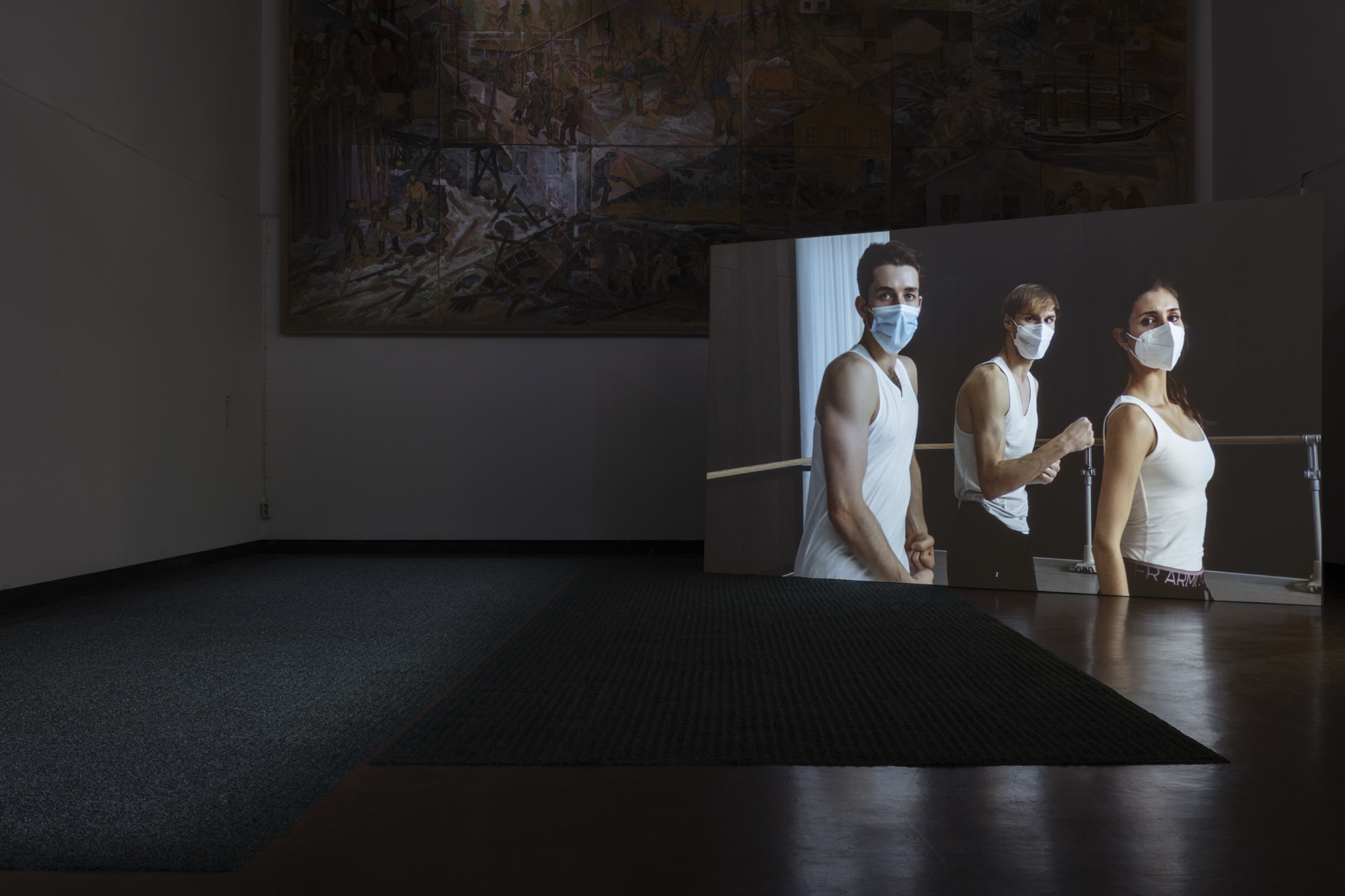 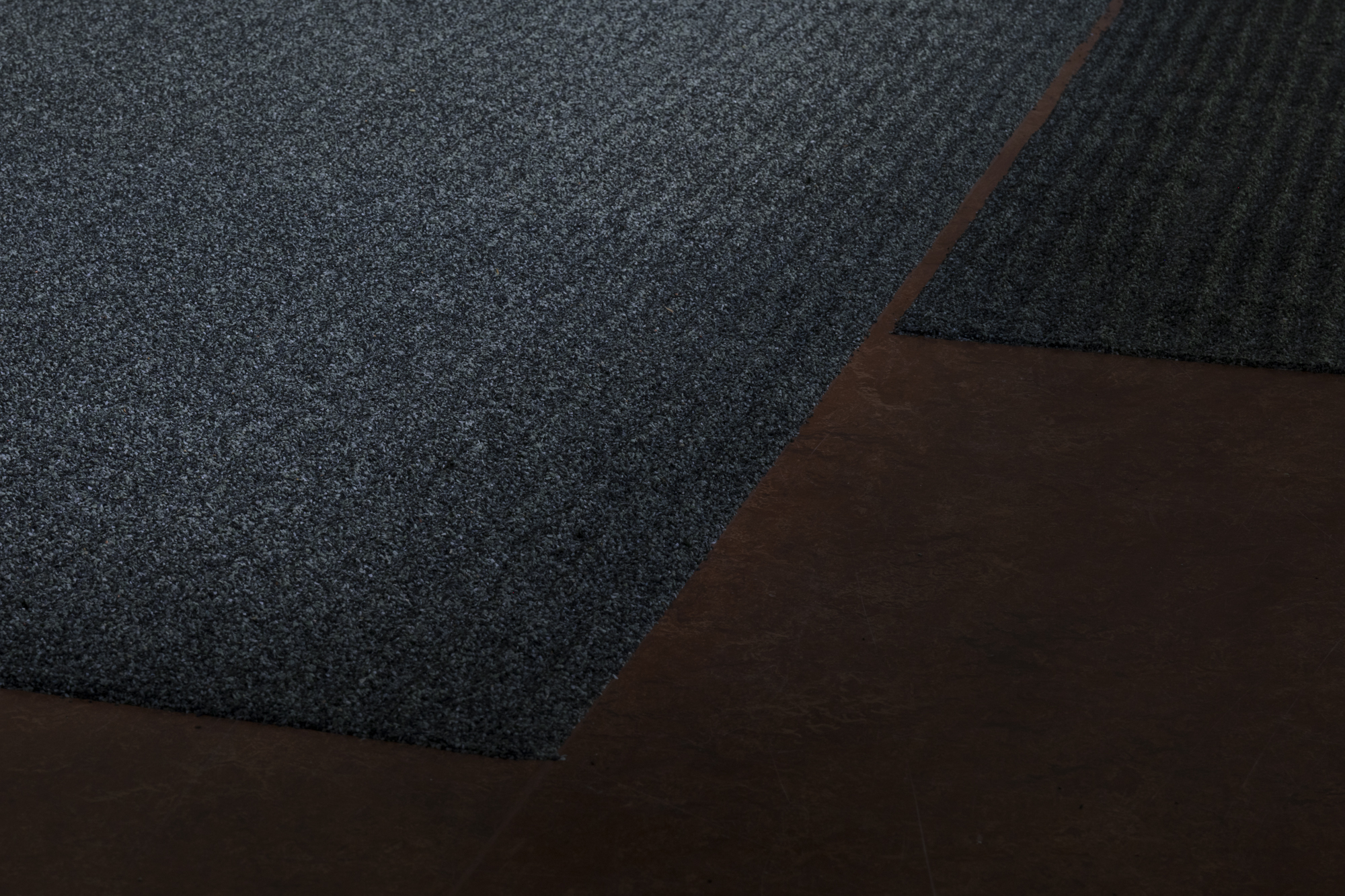 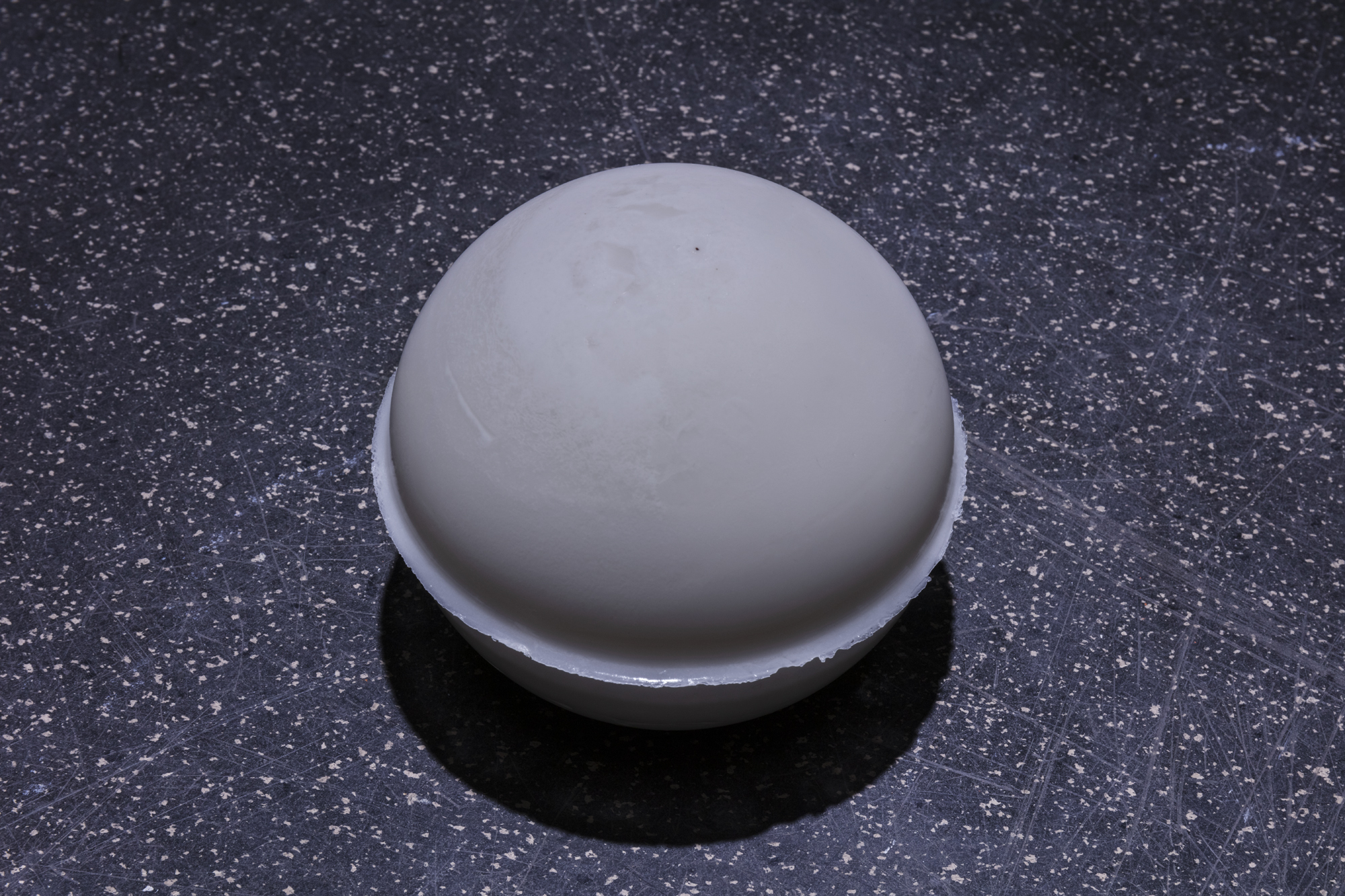 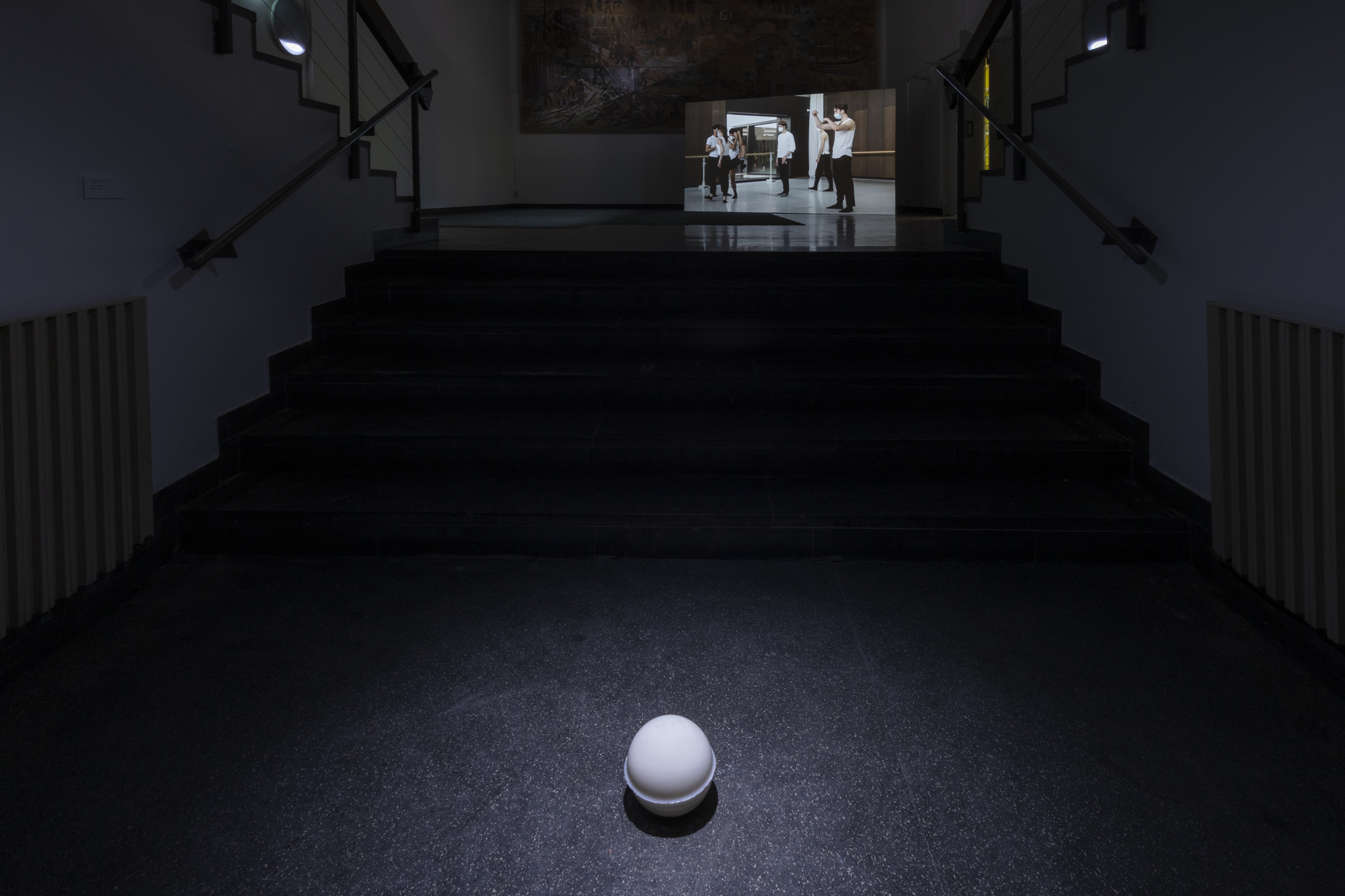 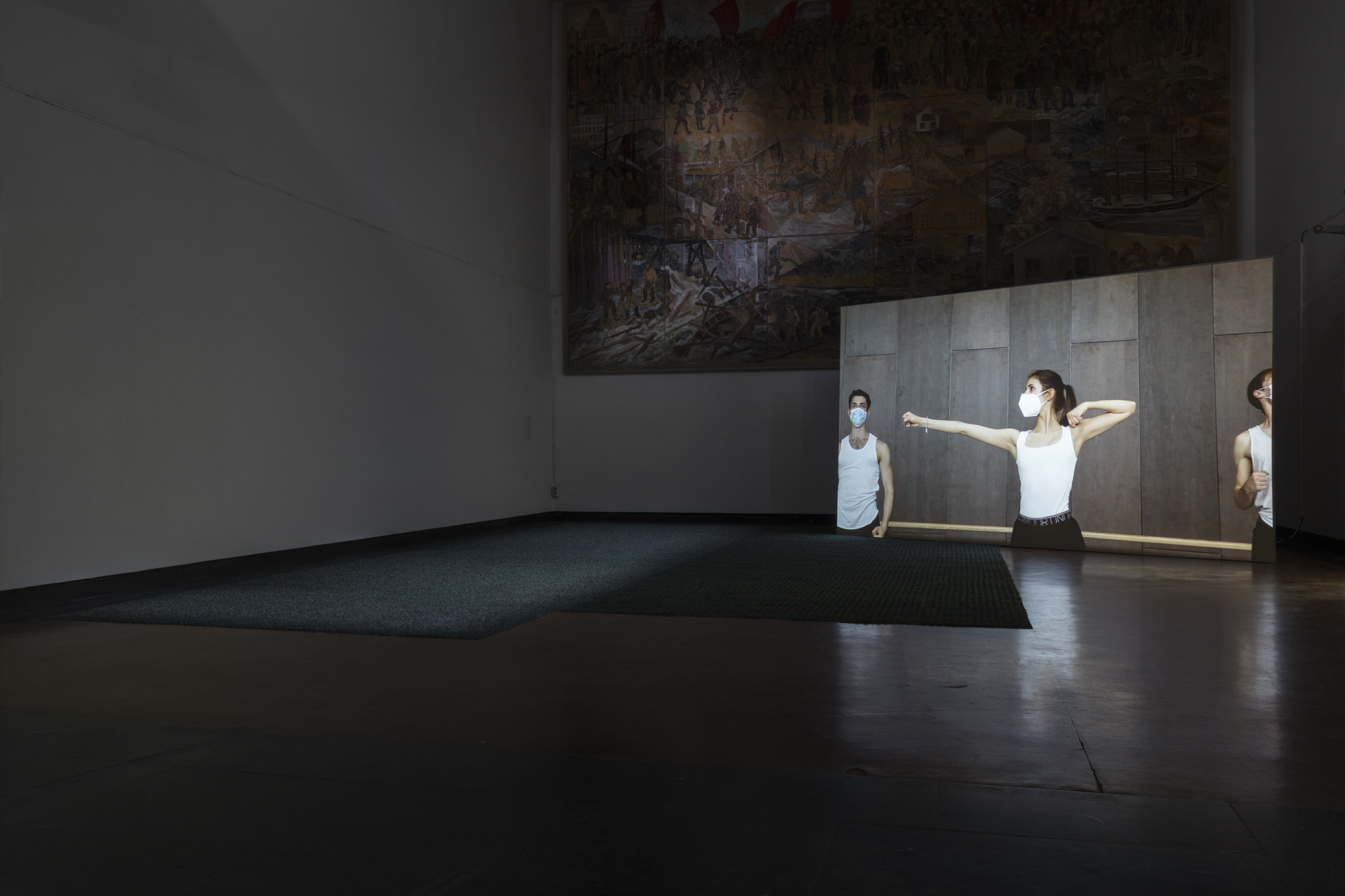 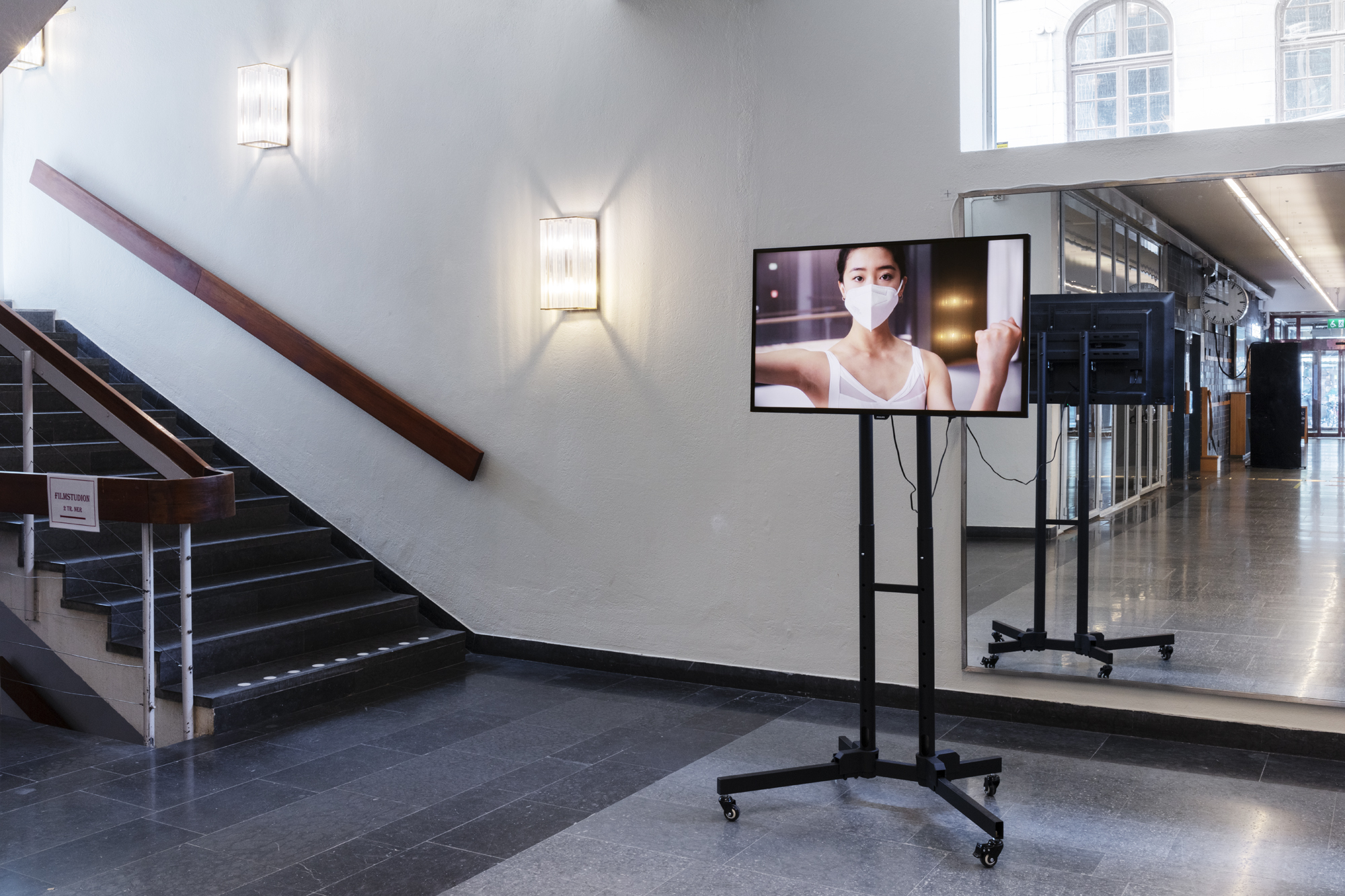 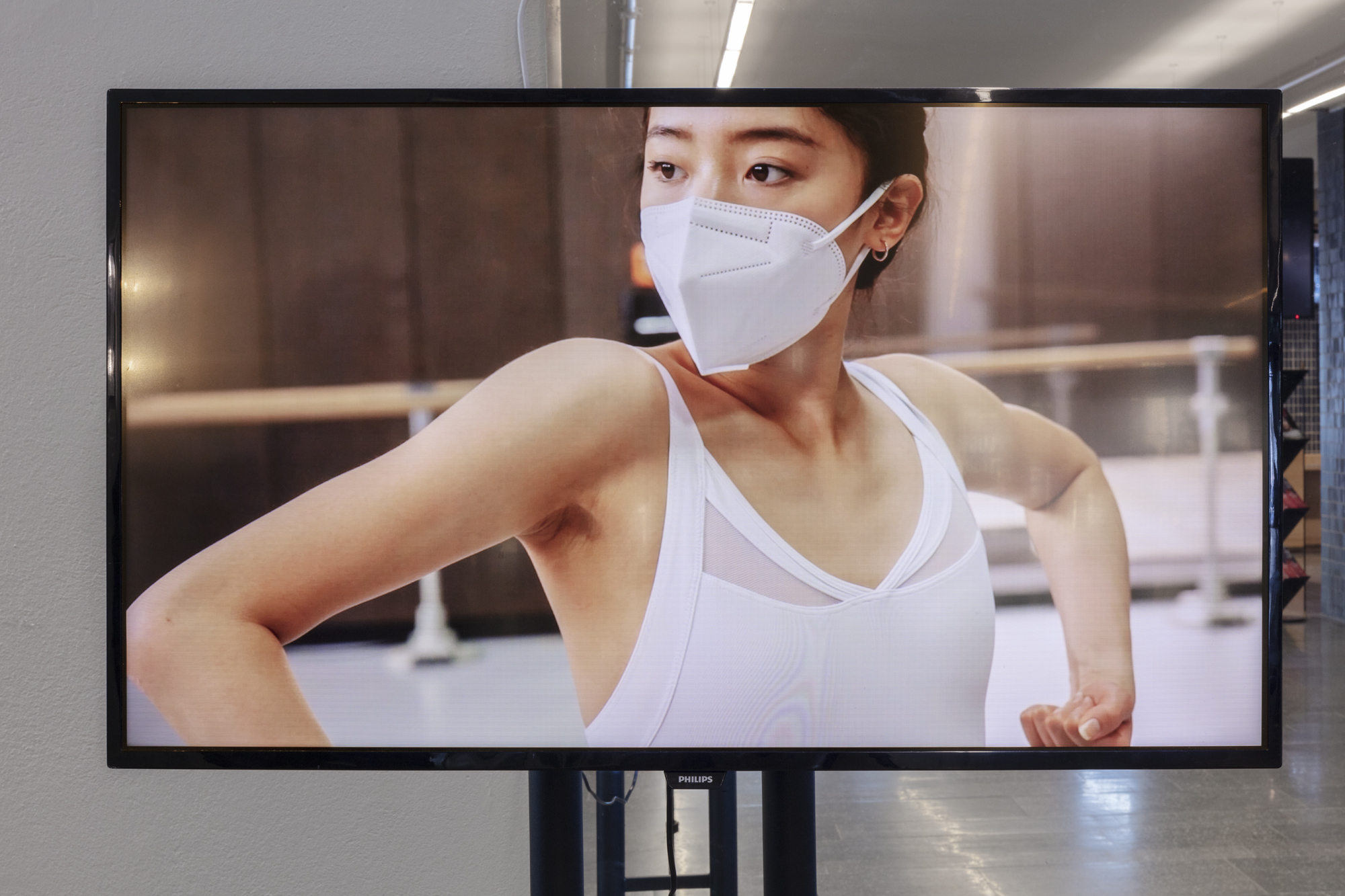 In her artistic practice, Chiara Bugatti examines materials that seems to have lost their main function. Through three works of sculpture, installation and video, she explores the memory of materials, their historical associations and narrative possibilities, such as allowing marble to break down to then re-emerge in perishable room installations, or possibly eternal forms. Sudden external influence, or slow decomposition processes, make visible the fragile and temporary in the constant and solid, when human movement is put in relation to a monumental stillness. One of the works in the exhibition is made in collaboration with artist Sebastian Moske and choreographer Alessandro Giaquinto.

Chiara Bugatti (Lecco, Italy) is a visual artist based in Stockholm. Bugatti holds a BFA from the Accademia di Belle Arti di Venezia (IT, 2014), an MFA from Umeå Academy of Fine Arts (SE, 2016) and a Postmaster from the Royal Institute of Art in Stockholm (SE, 2021). She was recently a grant holder at IASPIS (SE) and fellow at Akademie Schloss Solitude in Stuttgart (DE). She is part of the current exhibition Släpljus at the Carl Eldh studio museum, as well as the 15th Trienniale Kleinplastik Fellbach in Germany and her work has been exhibited in institutions across Europe.

Sebastian Moske is an artist based in Berlin. After studying acting and working in the theatre, he studied art under Rosa Barba at HfK in Bremen and was part of IASPIS international residency program in Malmö (2021). Alessandro Giaquinto is a dancer and choreographer based in Stuttgart. In 2016 he joined the Stuttgart Ballet after completing his training at the John Cranko Schule.

Thank you to Studio Pica for the loan of installation material.

In Rymdrummet, two artists meet who get to grips with physics and the poetry of gravity. Through painting and animation, respectively, an aesthetic connected to the weightless state, movement and a transformative variability is examined. 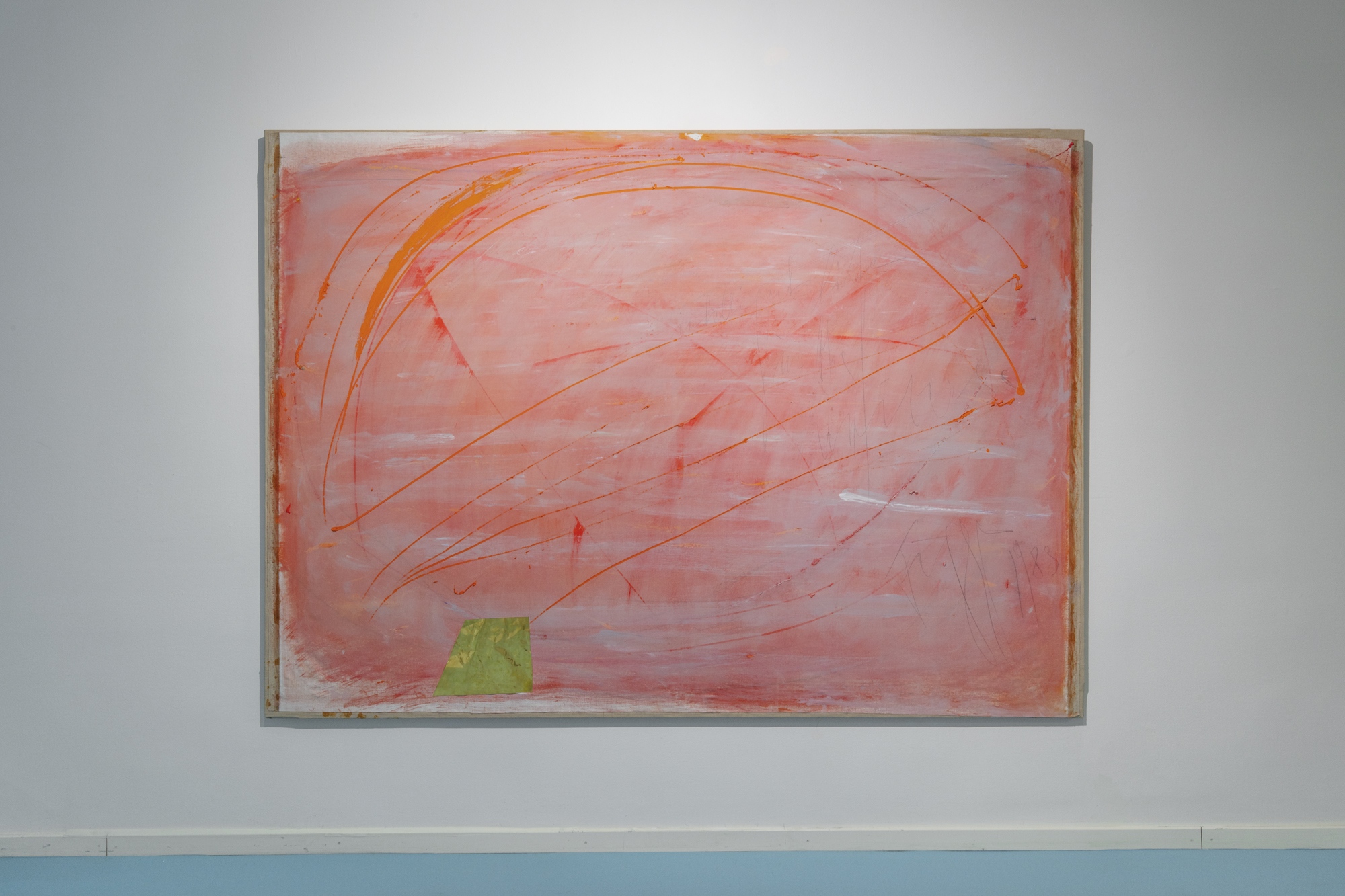 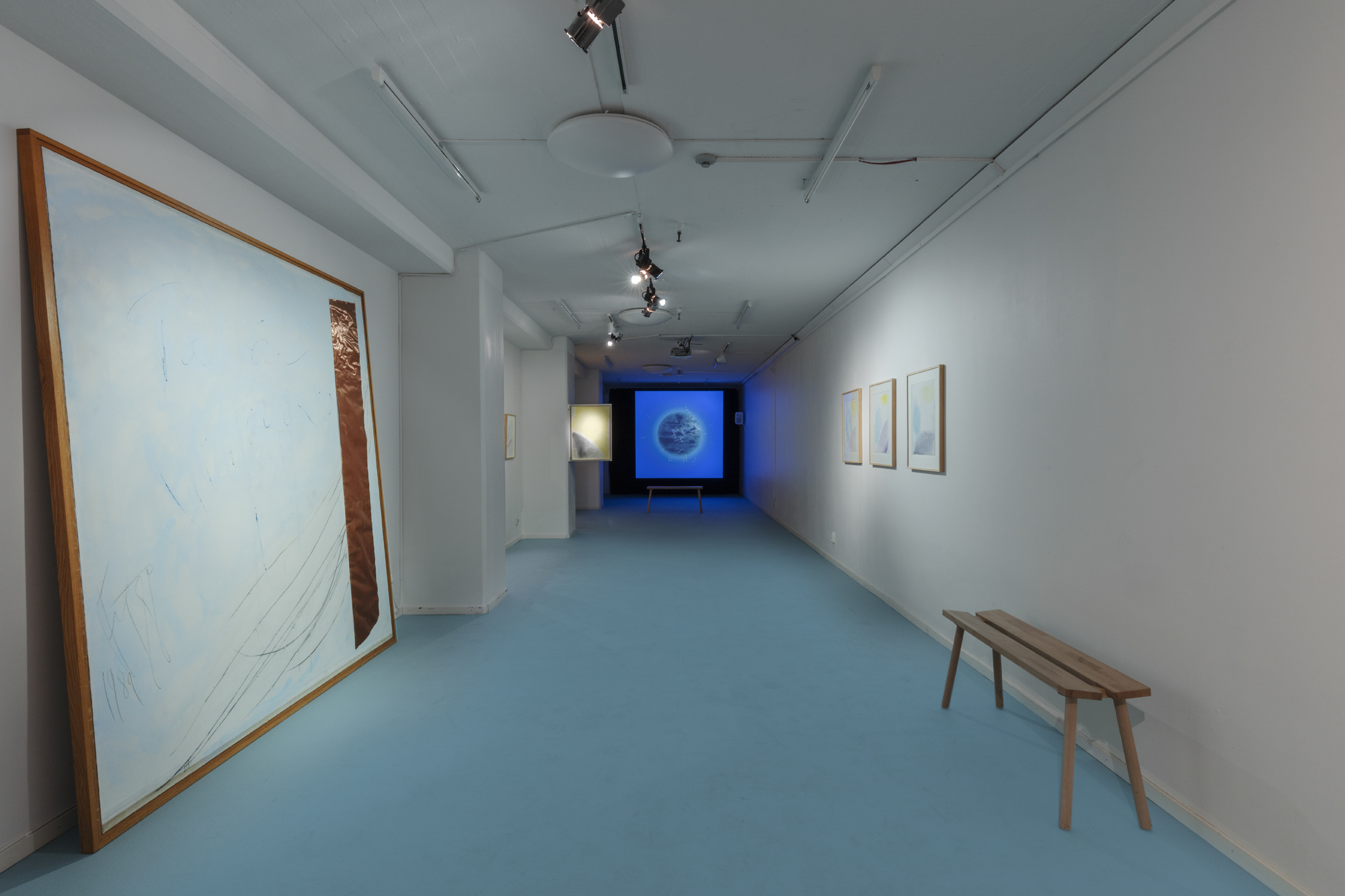 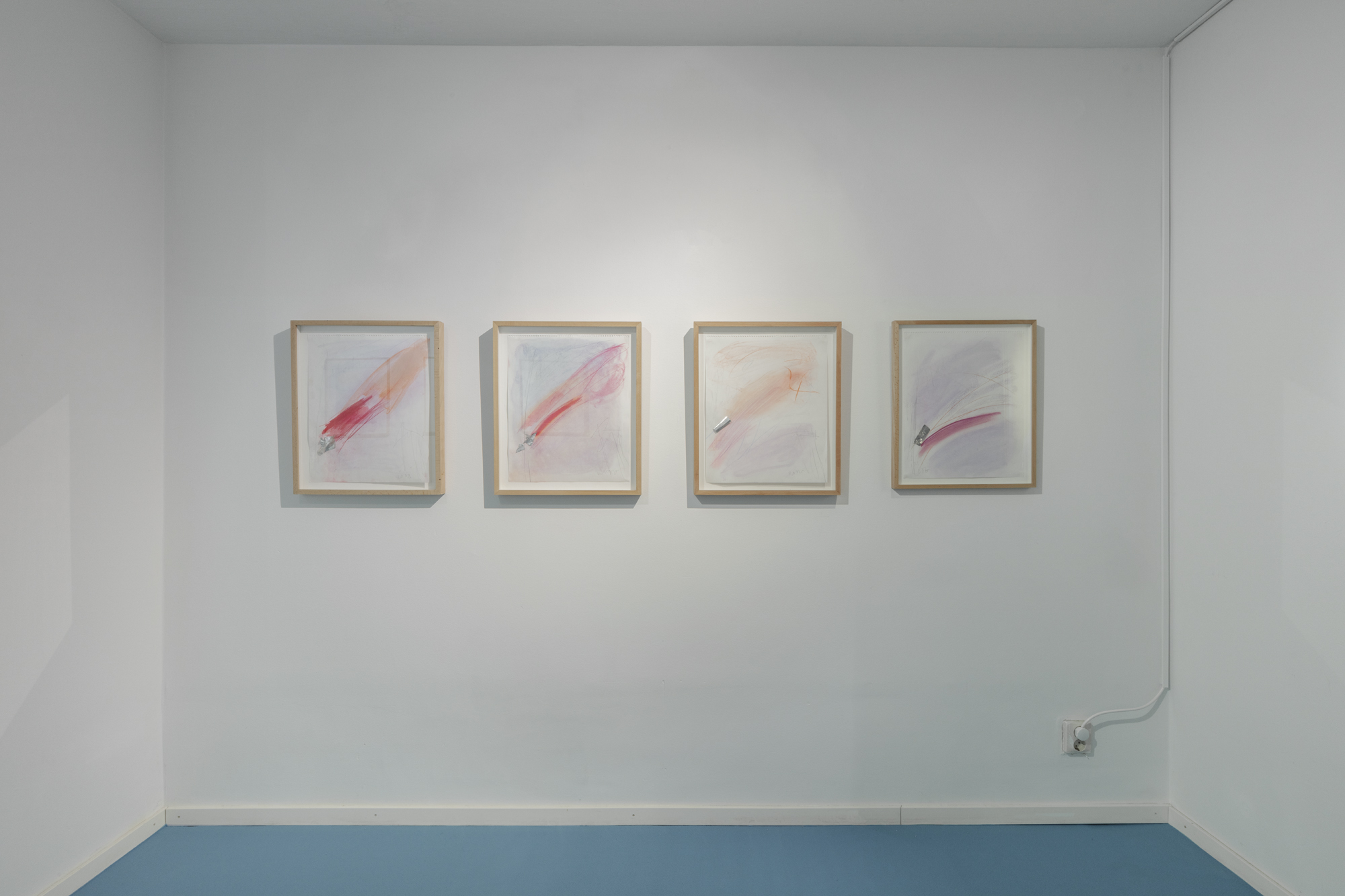 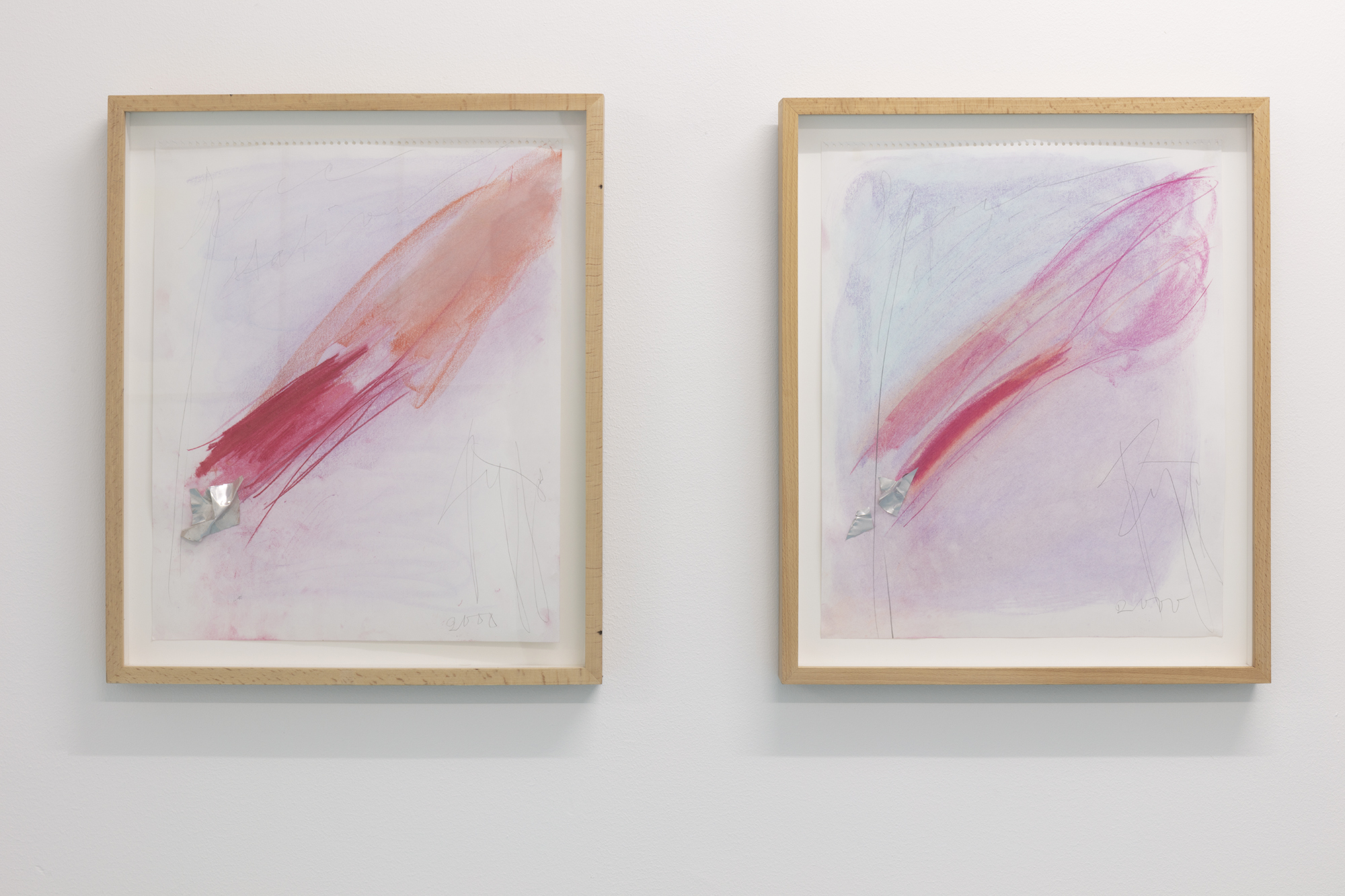 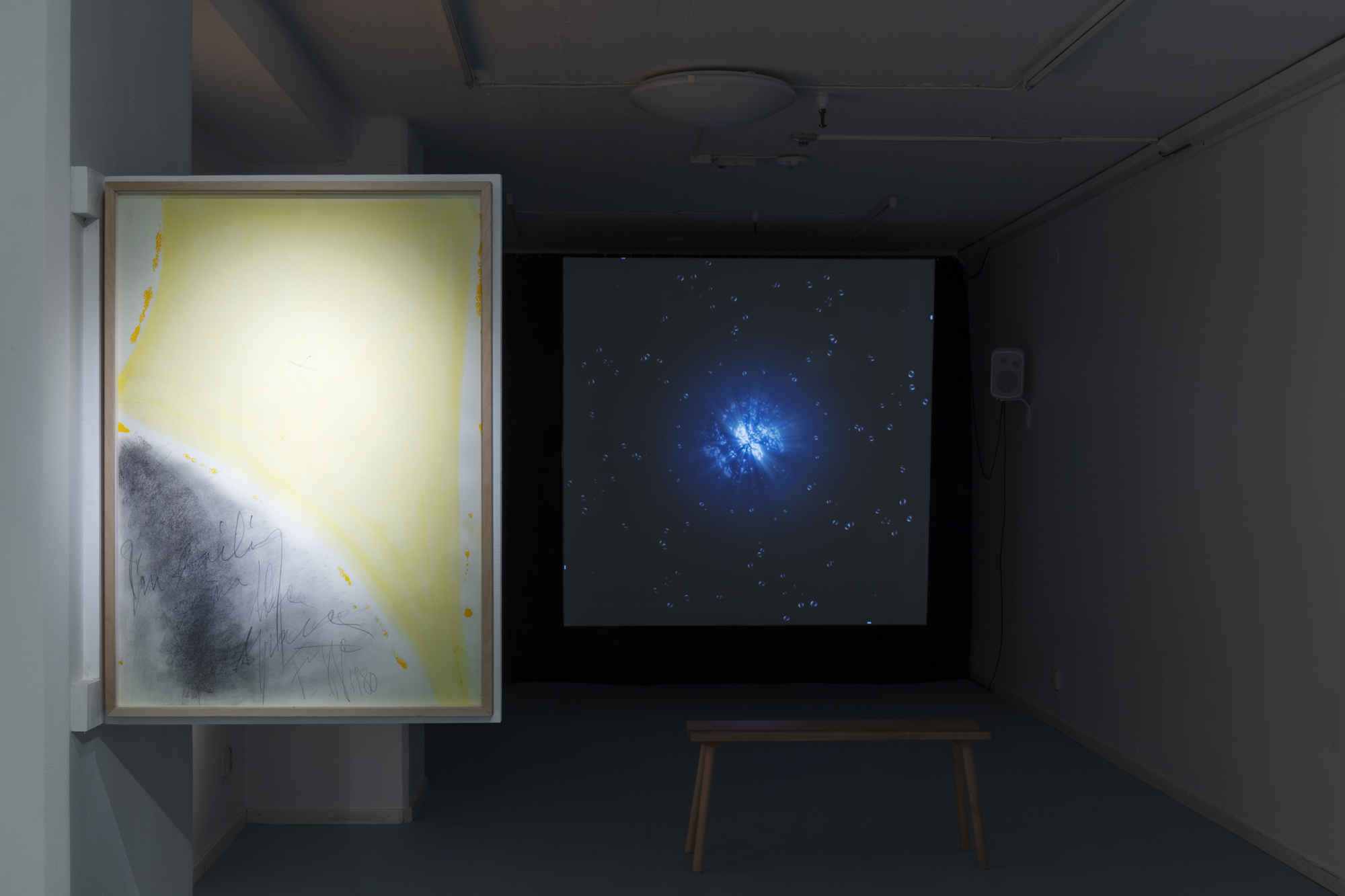 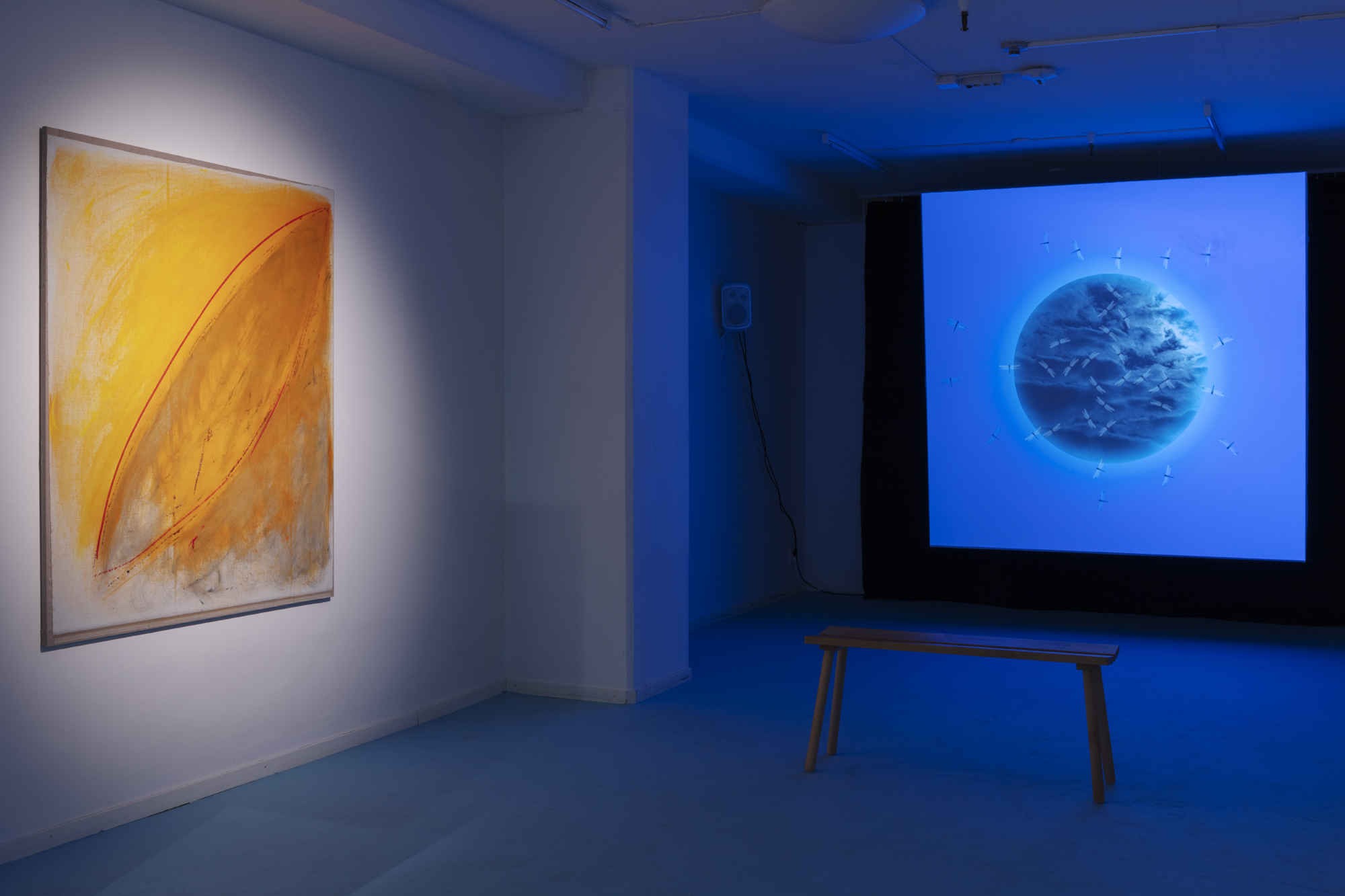 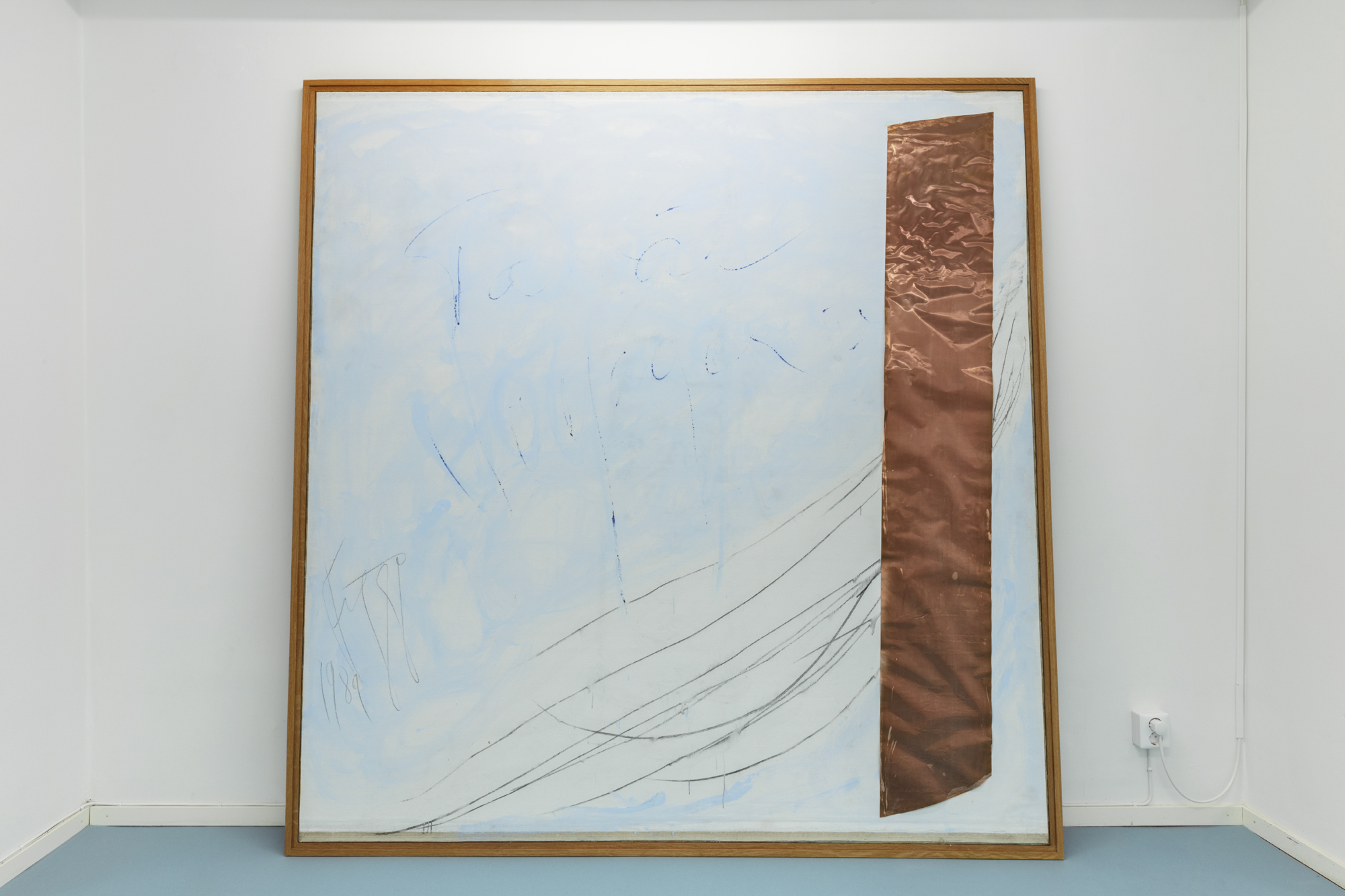 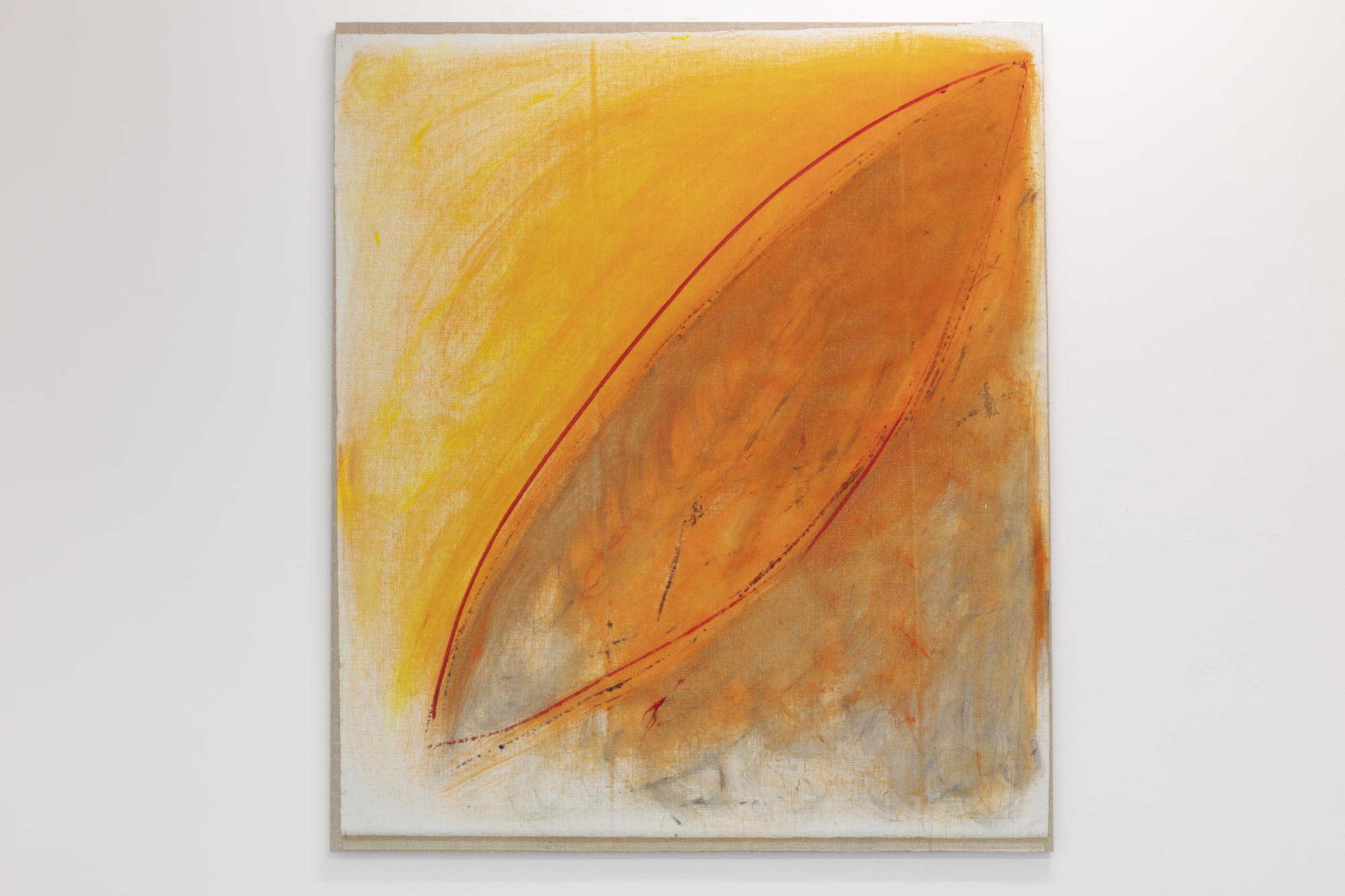 Eddie Figge (1904–2003 Stockholm) was an artist and poet, an innovator in modern painting in Sweden. After working at the theater and ballet, she began her artistic career later in life. During the 1950s, she found her language through informal painting with a world of motifs that revolved around light, darkness and space. Her style was characterized by a strong sense of color, movement and rhythm. She found inspiration in space travel, quantum physics and the poetic dimensions of science. Eddie Figge had her breakthrough at Galerie Blanche in 1961, and during the 80s and 90s she had several large museum exhibitions in Sweden and abroad. In 1989, Figge participated in the Sao Paulo Biennale with a selection of her space paintings. The last major solo exhibition with Eddie Figge was shown at Liljevalch’s Art Gallery in Stockholm in 2003, curated by Olle Granath. Figge is represented at the Museum of Modern Art, the Musée d’Art Moderne in Paris and the Museum of Sketches in Lund.

Agnieszka Polska (b. 1985 in Lublin, Poland) creates videos, animations and photographs, often using archival or stock material, combining it with animation. There is a certain state of emergency present in her works. It derives from the political and social environment of our time. But rather than moralistically referencing specific matters like ecological issues, or the rise of nationalistic sentiments, the artist focuses on creating an immersive experience for the audience. As a distant but diligent observer, the viewer becomes a prisoner of the video footage and events unfolding before his eyes. It’s the immersion that charges Polska’s videos with political potential. She has presented her works at international venues, among them, the New Museum and the Museum of Modern Art in New York, the Centre Pompidou and Palais de Tokyo in Paris, Tate Modern in London, Hirshhorn Museum in Washington, DC, and Hamburger Bahnhof in Berlin. Polska also participated in the 57th Venice Biennale, 11th Gwangju Biennale, 19th Biennale of Sydney, and 13th Istanbul Biennial.

The exhibition is supported by The Swedish Arts Council, the City of Stockholm and the Region of Stockholm